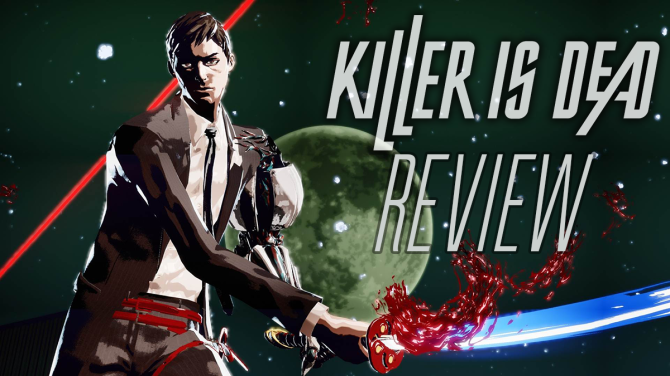 Auteur game director Suda 51 and his team over at Grasshopper Manufacture have spawned some fairly divisive games over the past few years in their twisted laboratory. No More Heroes, Lollipop Chainsaw, and – my personal favorite – Shadows of the Damned all were sang the same chorus from each of their respective crowds. Haters hated because of the sticky controls and questionable replay value while fans clung to the immeasurable style and humor. Your enjoyment depended entirely on how much of one side you were willing to overlook. Killer is Dead is the next demented test tube baby fathered by Suda 51, but instead of being an awkward, endearing, and unique piece of software, it ends up desperately scraping together the most trashy elements of his prior games and compiling them all into an offensively terrible collage of horrendous game design.

Mondo Zappa, the mindless drone of a playable character, is an assassin and he has to, um, do stuff… or something. Killer is Dead wallows in its creator’s signature idiocy but ultimately fails to relay the player any scraps of interesting narrative throughout the entire journey, let alone a comprehensible setup. From the first moments of the game, nothing made sense nor was it explained in the followed scenes. Who is Mondo? What exactly is he? Why is that man half a robot? Spelling out everything isn’t necessary, but this barren narrative landscape is ridiculous and begins the game on its leftest of feet.

Mondo: The biggest, non-noteworthy person ever.

Suda’s others games have also reveled in their stupidity but they made sense. A zombie-slaying cheerleader, a demon-killing Mexican with “Fucking” as his middle name, and an assassin aspiring to be the best assassin are all gorgeously dumb ideas but they all were grounded within some realm of reality, making it relatively believable. Killer is Dead is balls-out stupid from the get-go just for the sake of it, lacking any sense of consistency or sensibility. Nothing makes a lick of sense or has any sort of flow so it becomes an uphill battle when time comes to care or even pay attention to the dribble on-screen.

The people inhabiting this dimension are just as baffling as they are forgettable. There’s the all-too-dry, I’m-too-cool-for-emotion Mondo, the black robot man, the cleavage-bearing piece of meat, and the insufferable little girl that never stops being nails-down-a-chalkboard annoying. It’s an all-star cast filled with one-dimensional polygons that never entertain or become even remotely sympathetic. They just become pathetic. 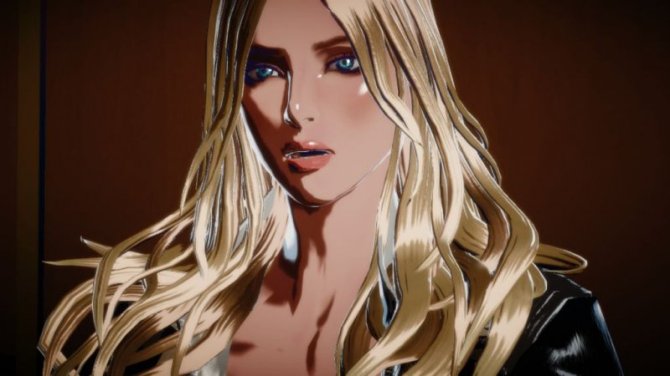 I literally don’t know her name because that’s how unimportant she is.

Mondo’s swordplay can fall under the same umbrella. In a similar vein to Lollipop Chainsaw, Mondo swings his sword through faces and chest cavities by tapping or holding the attack button. Mondo can also, although inconsistently, break an opponent’s defense or use his freaky robot arm to shoot, drill, or freeze enemies.

Don’t expect any of this to be much fun though. Killer is Dead lacks any sort of complexity or depth, devolving into more of a mindless mashfest than a combo-heavy, skill-testing affair. You mash X or Square and dodge every few hits until that thing bleeds out of every orifice then you continue to do that until you die or finish. There aren’t any sweet combos. There’s about as much depth as a kiddie pool. There isn’t nearly enough responsiveness within the controls to yield satisfying twitch-based swordplay. Every swordfight is just as derivative as the last one, with amounts of frustration being the only elastic variable. Suffocatingly linear levels funnel you from one arena to the next and you repeat that (with some terrible turret sequence tossed in for “good” measure) for six hours until you watch the credits roll in front of your bored eyes. It’s rote game design straight from the early 2000s.

You’ll be as bored as Mondo always seems to be.

Peppered between the bare-bones melee fights are the Gigolo missions, which are as classy as a crusty Hustler magazine poised beneath a meth lab deep within the most racist parts of Kentucky. On a base level, Mondo takes a girl out on a date with the sole mission of fucking a weapon upgrade out of her as long as she doesn’t catch you staring at her breasts or crotch. These are so repulsive that I almost don’t even know where to set my crosshairs on first.

These “missions” basically reward you for being a creepy, perverted, miserable pile of shame because you need to fill up a bar by being a voyeuristic, basement-dwelling weirdo. Like I hinted at before, when your braindead victim turns her head or averts her gaze, you need to stare at her boobs or lady parts long enough to gather up the courage to give her a gift. Do this enough times and she’ll sleep with you. Do that enough times and she, quoting the Trophy/Achievement, becomes “your prisoner in body and soul.” It’s appalling how gross this is, from the incredibly awkward way they just stare at you, repeating the same, deadpan phrases and only seem to be desperate sex puppets with a hole to fill. Gameplay-wise, they don’t even yield a modicum of fun. So not only are they literally no fun to play, but the rampant sexism is deeply disturbing enough to question the system entirely.

“Excuse me ma’am, you seem to have my drill upgrade for my arm lodged in your vagina.”

Grasshopper’s yearly releases always have a trademark low-budget-but-stylized art style, but Killer is Dead only captured the “low budget” part. While the cel-shading has a fresh look when compared to realistic browns, it never becomes a pretty game to look at outside of the black, white, and red scenes when a certain dodge move is executed. Every asset just looks cheap, lacking detail and containing entirely too many shadows to become as vibrant as the cel-shading wants to be. This is the ugliest cel-shaded game I have ever seen, which was a feat I did not know was possible.

The soundtrack has shared this similar, declining fate. Say what you will about Shadows of the Damned and Lollipop Chainsaw; they had utterly amazing soundtracks that are undeniably among the finest in games. Outside of maybe one or two jingles, no tracks in Killer is Dead are even as remotely catchy or memorable. Filler music beats for every filler level in a filler game. I guess it fits. 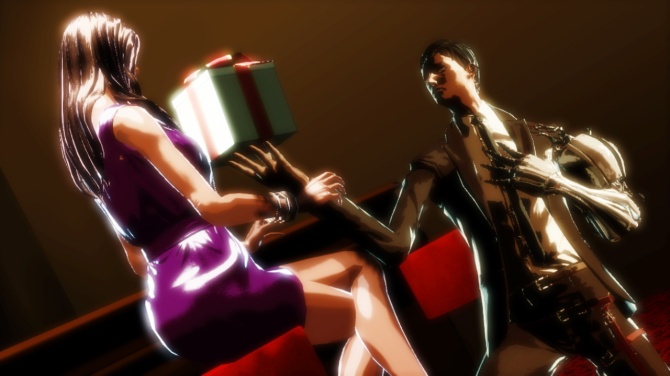 Killer is Dead is the Suda game that I cannot see keeping up the recurring hard divide between love and hate. It has no real redeeming factors. A whiff of style may linger somewhere within the dark depths of the code, but every one and zero that has surfaced is utter garbage or barely functional. Heavy sexism, mundane combat, and an abhorrent narrative drag this game’s face through the mud, sand, fire, and then back through the mud again. Suda may need to re-check his dose of crazy pills after this one.