﻿ The Last of Us Review | Console HQ 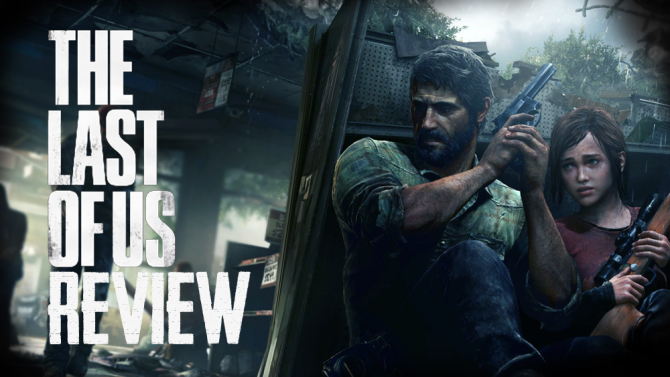 Naughty Dog has gradually ascended the ladder of seriousness. From the slapstick Crash Bandicoot to the wavering tones of Jak and finally to Uncharted‘s witty atmosphere, the coveted developer has slowly but surely injected a more mature tone, although maintaining a mostly lighthearted ambiance. Naughty Dog’s newest release, The Last of Us, is a natural tonal progression for the team, subbing in a wise-cracking treasure hunter for a desolate fungus-driven apocalypse. The tone is grim and the subject matter is admittedly worn, but through sublime design, impeccable storytelling, dramatic acting, and open-ending gameplay mechanics, Naughty Dog has expertly crafted one of the greatest, most emotional rides in all of gaming.

After one of the most striking openings in recent memory that succinctly sums up the upcoming tones and themes, we are dropped into the life of Joel two decades after the initial fungal outbreak. He’s a grizzled man struck by immense loss and forced to uncomfortably live with scarce resources but he is quickly met with an ultimatum. A friend offers him a deal to escort a young girl, Ellie, to a militia group to trade for a stash of weapons. It seems like a simple premise, but it is met with far more nuance and complications that only add more gravitas to the ever-important plot.

The narrative strengths are multifaceted, but one of the most striking aspects is the performances given by the actors. Joel and Ellie both deliver their dialogue with incredible conviction and emotion and, due to the marvelous animation, is thoroughly conveyed to the player. Subtle facial movements and small gestures mix perfectly with the superb acting and only reinforce the game’s astronomically high level performance capture. The many side characters are just as well realized but seeing as though you spend the most time with the two protagonists, it seems fitting to lay more praise onto them.

The same goes for the impeccable script, one that captures a wide array of emotions. When the term “emotions” is used, it usually narrow-mindedly pinpoints the more dramatic or sad sides of human relations in hopes to capture a more grounded, serious tone. The Last of Us utilizes those tones brilliantly, but it also intelligently makes use of the whole gamut of feelings and emotions. Happiness, pity, shock, love, hate, despair, and hopelessness are among the feelings exhibited by the dialogue and situations at hand. Even though they individually have a gold star-level quality to them due to the script masters at Naughty Dog, the way in which they weave together is the truly remarkable task. Because the actors have such a realistic collection of emotions and appropriately grow throughout the journey, it makes them more believable and interesting as characters. 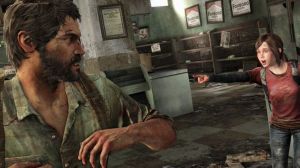 Unlike most allies, she’ll actually help you.

These characters find themselves in some sticky situations, ones that far surpass the damnation of being associated with a post apocalyptic setting. Similar to The Walking Dead, despite it taking place within a scenario that has a tendency to become trite and predictable, The Last of Us presents the player with circumstances that don’t feel ripped out of the Apocalypse Story 101 book even if one or two ideas aren’t fully original. When brought together with the unrivaled acting and outstanding pacing, the game keeps going and never lets up, urging you to continue. All of this desperation leads up to an ending which feels right by going against the grain and attaining that elusive satisfying conclusion games usually mishandle.

Gameplay can be mishandled, but The Last of Us bucks most conventions and melds a gameplay experience all its own. In a tense economic world where action is the focal point of most games, TLOU places the survival-based nature enforced by the world and plot and lets it bleed into the gameplay. Ammunition and provisions are limited and scattered throughout each broken down locale, making scavenging and crafting a necessity to just get by. Creating makeshift bombs, health kits, Molotov cocktails, and other tools makes you really feel like you really are surviving and since crafting happens in real time, you always have to watch your ass in this dangerous world. 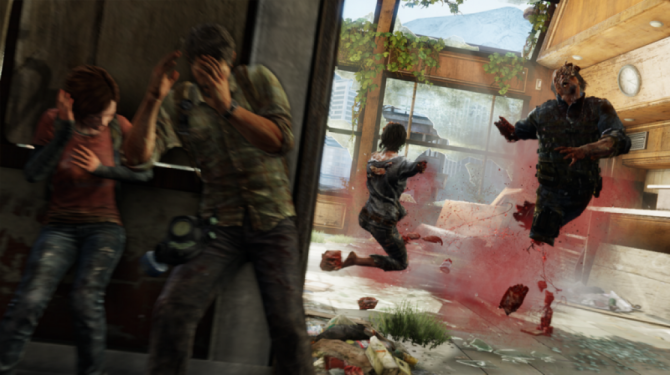 This game’s violence is unsettling but effective.

Watching your ass becomes a full time job since you aren’t given the liberty of lackadaisically dumping clips into enemies. Because of this, encounters become naturally strategic. Instead of making yourself known, carefully and quietly picking off foes can help even the odds when the usually stacked against you. Stealth isn’t forced but greatly encouraged since the game’s difficulty and high-damaging opponents can make waste of you fairly quickly.

Approaches can differ depending on the faction you are facing off against. Undead-like infected called runners function like nearsighted zombies and use a horde-like mentality to try to kill the player. However, things get more interesting with the clickers, which are far more deadly. These ugly fungus creatures have lost their eyesight due to a longer lasting infection, but can kill Joel in one hit if he wanders too close. It’s a bold design choice but it works because it allows them be an extreme threat and allows them to actually be truly terrifying. I hated them but I loved them. They aren’t impossible to take care of but can punish you if you are ill equipped or just plain sloppy. Bloaters are the “Tank” equivalent and when all the types of infected are mixed in, it can make these encounters adrenaline-based, nail-biting tests of skill or tense, scary situations depending on the context.

Infected are difficult but satisfying to manage.

Fighting humans has some similarities but they are different beasts. Humans are naturally more intelligent and require more planning and grit to conquer. Stealth is once again encouraged but any approach displays the incredible AI found in The Last of Us. Using a group mentality, they’ll attempt to flank you and sneak around, even calling out your specific location when they spot you. However, the lack of a binary “alert” system is the most impressive. Instead of always knowing where Joel is hiding, foes can lose track if you run away or quietly move around. This allows every encounter to be a blissful combination of stealth, shooting, and running away, making each fight different and flexible. No skirmish feels the same and the sense of cobbling together an improvised plan allows the playing part of The Last of Us to be a tense yet incredibly satisfying experience.

As if it was any surprise, The Last of Us is gorgeous in every sense. Naughty Dog has truly molded the PS3 into producing high quality visuals that best anything seen in the console market. Textures are impressive, the lighting is phenomenal, and the density of each locale is quite noteworthy especially when the meticulousness of each small fixture is taken into consideration.

As much as these environments are wonderful to gaze upon, they do more than act as pretty window dressing. In a world ravaged by destruction and chaos, the way nature has taken its course over the abandoned man-made structures is oddly attractive. This destruction almost acts a storytelling element, saying things about the world without actually saying anything. The implied story behind each broken down facility comes to life as you piece together what has happened to leave it in such a dire state either through collectible diaries or critical thinking.

Ironically, this lovely world comes to life the more you kill. Extreme violence and absolutely disturbing takedowns permeate the entire playthrough, but instead of feeling like violence for violence’s sake, it feels right at home. Everyone here is trying to survive as evidenced by the looting aspect, the narrative tones, and the enemies so when Joel forcefully smashes a man’s scarred face into a stalagmite-like shard of glass, you know he does it because he has to. It’s effectively brutal and once again reinforces the bleak dystopian world that encompasses the world now. Dark yet poetic.

Sometimes you have to punch a dude in order to not get punched.

The audio also plays a vital role in establishing a mood. The solemn tones of Gustavo Santaolalla carefully reinforce the bleak times through his soft acoustic sounds. The music doesn’t stand alone since the audio design is an unspoken hero that contributes to the gameplay. Not only are the sound effects fitting and disgusting, but more than once I used my ears to deduce where enemies were located. This is vital given how deadly some enemies can be. Be it music, dialogue, or moment-to-moment sound effects, this game ensures headphones are the best way to play.

The Last of Us is easily worth full admission price based on the campaign alone, but the online multiplayer is a fantastic addition worth getting into. Aping the survival aspects from the campaign, the multiplayer modes become less about running and gunning and more about surviving and being strategic. Technically, you can run and gun, but the team that plays intelligently usually wins. Playing deliberately and allowing matches to garner natural tension sets TLOU‘s multiplayer apart from the copy-and-paste mentality almost every other multiplayer mode has. Of course, it has the unlock and progression aspects you’d expect, which makes the metagame a nice underlying incentive to keep playing. Multiplayer is usually shoved into franchises that don’t need it so it’s that much more surprising that the competitive multiplayer is actually as good as it is.

Multiplayer successfully retains the brutality, scavenging, and survival aspects of the campaign and is a hell of a lot of fun.

The Last of Us is a true landmark in gaming. Storytelling and character building are among the best here, filled with jaw-dropping moments that tug heartstrings, evoke tense laughter, and downright disgust the player as they make their way through this hell hole overtaken by a wretched fungus. Barely scraping past each fight through careful resource management was a ballsy decision, but it has paid off and resulted in a unique and memorable set of mechanics. Naughty Dog’s powerful journey was an exhaustive thrill ride, one that will continue to be brought up in gaming’s future as an unforgettable and influential piece of software.