On the nerd Venn diagram, the overlap of Mortal Kombat and comic books is pretty significant. Well aware of this fact, developer NetherRealm attempted to combine to two ideas for 2009’s Mortal Kombat Vs. DC. Finding a lukewarm reception between gamers and critics, NetherRealm stuck to what they knew best and created 2011’s incredibly violent and spectacular Mortal Kombat reboot. This split didn’t leave DC completely out to die though. Instead, it led to Injustice: Gods Among Us, their new fighting game significantly lacking in fatalities and people named Sub-Zero. Stepping back in over the top violence but subbing in a more popular universe, NetherRealm has crafted a fighting game stepping far enough into familiar territory but carving out enough of its own path to become worthy for any fighting game enthusiast.

As far as most fighting game stories go, the boilerplate answer of “dudes punching dudes” usually suffices. Injustice‘s narrative presentation, as was the case with Mortal Kombat, far surpasses anything else presented in the genre.

Superman is far from being the iconic, save-all hero that most people have come to know and adore. Early events have shifted his friendly tone to a more benevolent one, enslaving all who fail to join his side and see through his goggles of twisted justice. 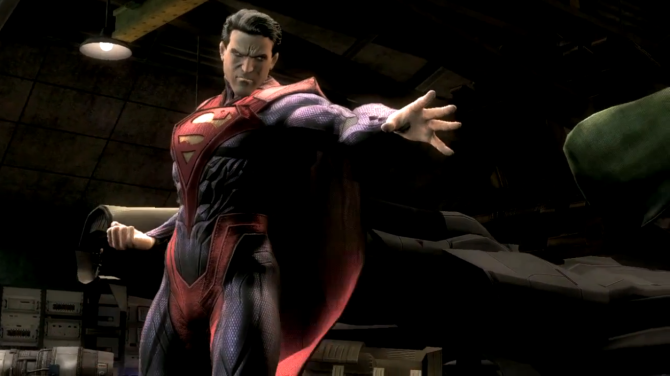 Or at least that’s one of the Supermans (Supermen?). Dimensional travel is a key method of carrying the narrative, since a good chunk of the cast mysteriously jumps to this parallel universe. The “main” universe inhabitants start interacting with the other universe’s travelers, all with the same goal of halting Superman’s evil rule.

Excuse me if that was confusing to read because that slight sloppiness is how this tale is presented. Since the player is dealing with two versions of nearly everyone in the cast, it can be a little too confusing at times to remember the loyalty of certain characters. Is this the bad Aquaman? Is Cyborg faking his allegiance to Superman? Or did I just get confused to which one was actually on the screen? It may not take long to come to a conclusion, but quick mental checks are necessary at every cutscene to ensure that the plot makes sense.

I think that is the good Aquaman?

Because when Injustice does find the time to make sense (as much as a comic book story can make sense), it can be quite an engaging tale. From recognizable characters like Wonder Woman to more obscure picks like Black Adam, each of these digital beings puts on a convincing performance due to the fluid animation and solid voice acting. Chemistry and clever quips from the cast differentiates each from each other and allows the appropriate characters to become likable. Except Aquaman. Because fuck Aquaman.

These well-acted beings take part in a story that has its share of twists and turns but the main positive takeaway is the pacing. Because there is no visible loading, the story always feels like it is moving. A cutscene will play and seamlessly lead right into the next fight and the process repeats. This forward momentum ensures there isn’t a lull in the action and strikes the perfect balance between the story bits and the superhero on supervillain brawling.

Said brawling holds the game up no matter which mode the player partakes in. The basics are fairly standard: two fighters face off in a two-dimensional setting using an array of special moves and combo attacks to deplete the opponent’s health bar first. Traditional, yes, but Injustice takes some risks that separate it from its competitors but maintains enough consistencies to not alienate the existing fanbase. 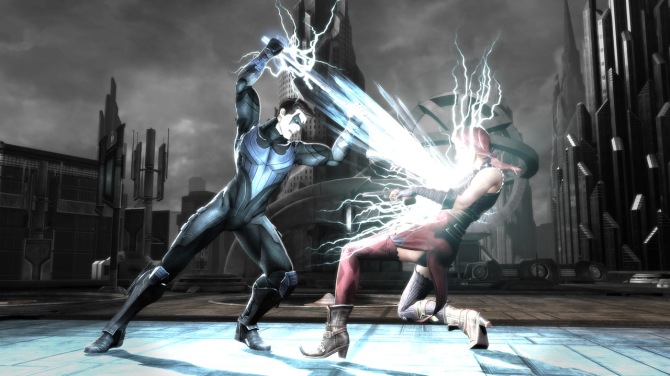 Combos, extensive (and satisfying) juggles, button inputs, and special moves share a similar tempo to that of Mortal Kombat, but, despite sharing the same developer, Injustice offers a suite of changes not seen in the bloodier franchise. Environments are no longer pretty locales to beat the opposition down in; they are now part of the fight. Hitting a shoulder button allows the player to interact with a feature in the background, but most of it feels unfair. Nearly all actions that involve the background are unblockable, nigh unavoidable projectiles that feel far too cheap for their own good. Allowing these uber-powerful moves to be unblockable would negate most issues associate with this feature.

Environment transitions are far more fair and are much more visually pleasing. Corner an opponent into a specific side of the arena sets them up for a greater beating via a transition. Pressing back and the heavy attack buttons, fighters can be launched through one part of the arena into a whole separate one. A devastating move in a gameplay context, transitions not only deal damage but unveil yet another layer of each locale. Each of the ludicrously over-the-top short cutscenes accompanying each transit offers a level of ridiculousness that is pleasing to see every time.

Aaaaaaaand off to the next area.

Another change NetherRealm offers is the Clash system one which, like its name, conjures up conflicting ideals. The clash serves is analogous to MK‘s Breaker move, interrupting a juggle combo when activated correctly. When initiated, players wager varying amounts of their super meter and rewards the top bidder with a health boost or deals damage to the opponent, which is dependent on who initiated the Clash. To some it may offer some underlying set of strategy, but it ends up feeling like a cheap way to extend the match and overly punish players who utilize their super meter. I found myself hoarding my super meter in fear that I’d lose a wager if I were to expend any of it on special attacks.

Fighting games are rightfully judged on their roster, an aspect that Injustice does a respectable job in. Batman may be represented more than any other part of DC’s pantheon, but the stable is a well-rounded list of their most known faces. More importantly, they play differently from each other and have their own reason to exist from a gameplay perspective. Differentiation is further perpetuated by the character ability, which gives the fighter a wholly unique power that can be utilized to perfect a certain member of the cast.

Like Mortal Kombat, Injustice is rife with modes and extra activities to do. Besides the usual suite of modes of multiplayer and single player, the Battles modes holds a different ways to take on opponents. It isn’t game changing, but the added modifiers a la Test Your Luck put a unique spin on the traditional fighting. The Challenge Tower also returns in the form of S.T.A.R. Lab missions that toss different stupid mini-games at you at almost every turn. Although silly and dumb, these wacky challenges extend playtime in an unthorodox method. Add in the economic system that unlocks different special goodies and Injustice becomes a game of hefty value with a lengthy to-do list.

Injustice: Gods Among Us adheres to a certain blueprint but it is one worth following. NetherRealm’s expertise in the genre shows in Injustice‘s quality story mode, deep fighting mechanics, and girth of extra modes. It may not be as groundbreaking as Mortal Kombat, but Injustice demands attention from those seeking a fighting game or those just really interested in DC. Injustice shows that breaking down MKvDC in halves was the better option.

+Deep, fluid combat system worthy of people of multiple skill levels
+Plenty of modes, content, characters, and unlocks
+Story mode flows well and is a good mash up of heroes and villains

-Environmental attacks are unblockable, thus feeling unfair
-Interdimensional story can be a little hard to follow at times