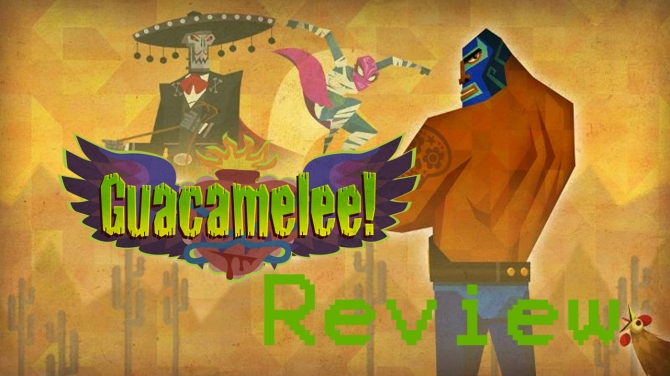 The impact of Nintendo’s iconic franchises is undeniable when gazing into the gaming hemisphere. Mario and Link’s imprint is still visible in almost every release, but Metroid‘s impression was nearly abandoned as technology progressed. You know the classic Metroidvania formula: your character starts from zero, builds up powers in a gradual fashion, and then opens up new pathways within a 2D platforming world. Guacamelee! shoves its way onto the Playstation 3 and Vita, resurrecting the timeless Metroidvania blueprint in its luchador-enamored world. Although such a shorthand description sells the game drastically short; Guacamelee! is brilliant homage that offers an ingenious mix of old and new ideas.

Guacamelee! wears its borrowed elements proudly on its spandex luchador suit. A mix of combat and platforming puzzles are in every room a la Super Metroid, with more areas unlocking once you have learned the appropriate move from the mysterious Choozo Statues (no, not these) scattered about. New abilities are perfectly paced throughout the game’s playtime. Once you get the hang of one move, a new one is introduced and integrated with the existing moveset. Because of this remarkable pacing, the platforming always has a new twist in it, making every room something new to behold. The last dungeon doesn’t offer any new techniques, but instead serves up a challenging amalgamation of every single ability, forcing the player to master them and skillfully use each in unison.

Guacamelee!’s references are anything but subtle.

Platforming doesn’t wait until the penultimate hour to rev up its difficulty though. Throughout the journey, the mere act of moving from area to area proves to test any gamer’s platforming mettle but never their patience. Guacamelee!‘s tight, responsive controls and forgiving checkpoints allow any devious gauntlet to really let loose, all the while knowing that you can’t fault the game for your failures. And the game doesn’t hesitate to show its old-school fangs from time to time, especially in the secret areas. Fair, but challenging platforming coupled with the dynamic, ever-changing nature makes this section of gameplay satisfying every single time.

Combat is similar, but instead of proudly wearing difficulty on its sleeve, Guacamelee! substitutes in combo-heavy fighting (or wrestling, whatever). Combat in these 2D platformers has always just been sort of there, only serving as a way to break up pace and allow the player to dispose of enemy forces. We accept it for it is even though it isn’t the sole draw of the genre. Rarely has it been a pivotal point for enjoyment like Guacamelee!. Brawling with enemies starts out as simple, mashy fun, but the true depth becomes apparent once more Choozo Statues are shattered (much to the goat’s chagrin). Although not completely comparable, Guacamelee!‘s combat shares many similarities with DmC Devil May Cry. Obviously, this is a favorable comparison because the ability for each game to possess the open ended choice needed for longer combos. Attack chains don’t feel canned but instead let the player choose what attacks happen instead of being shackled by limited design. Because of the sheer and shocking depth showcased as you progress, combat quickly becomes a gameplay facet to participate in rather than one to actively avoid.

Kick, punch, it’s all in the mind.

Despite its simplicity, the narrative is something you’ll inadvertently engage yourself in as well. Juan, your hardworking farmer protagonist, is offed rather quickly by Calaca, a mass of bones and evil aiming to kidnap the president’s daughter. Juan is revived via a luchador mask, turning his quest into one of redemption and rescue.

Rescue and revenge is about as archetypal as video game stories come, but the writing and delivery give the game the gold belt. Simply put, Guacamelee! is downright hilarious from its script to its visual gags. Humor stems from a few differing outlets and feed into a coherently funny game with multiple styles of comedic execution. Gaming references are displayed on many of the game’s billboards in creative ways and memes from sites like Reddit are prevalent (and might rub some the wrong way), but the game succeeds the most with its original writing. Characters have a peppy sarcasm about them, hastily (but cleverly) whipping insults and retorts around like suplexes in a wrestling ring, but are always funnily put together. Villains are overly cartoony in their nefarious plans and become funny parodies of actual bad guys while the secondary friendly cast all know what to say and when to say it, even if its intention isn’t always humorous. In all honesty, I’ve never laughed out loud so much while playing a game.

While not as funny, Guacamelee!‘s art style is worth ogling. Extracting a bright color palette and drawing inspiration from Mexican traditions, Guacamelee! always looks completely awesome on both platforms. Whether in the living or dead worlds (which both have different art and effects), the art direction always holds up due to the fidelity of the visuals and brightness of the colors. To match the incredible visuals, the musical composition is catchy and utterly fantastic. It just fits, with its Mexican overtones colliding with a more standard affair resulting in an aural fiesta. Rarely does a game’s score fluidly mix with its overall aesthetic and become so damn infectious to boot. 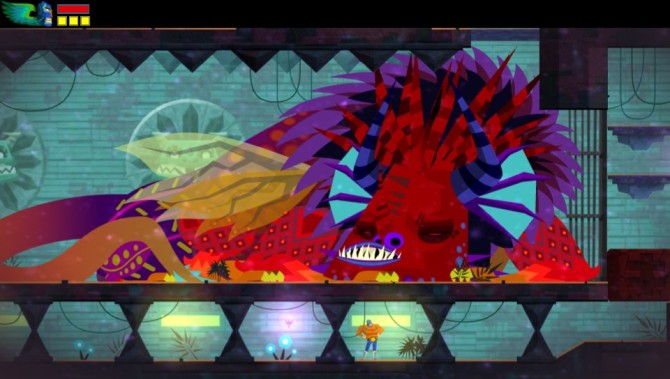 While beautiful in picture form, it’s gorgeous in motion.

Guacamelee! is endearing from end to end with little to complain about. Its eight hour completion time might turn off some, but it just means there is no fluff stuffed in to pad out play time. There’s just satisfying combat, tricky platforming, ingenious writing, gorgeous visuals, and a killer soundtrack all tightly packed into one downloadable title. Samus and Simon Belmont would be proud.

+Gorgeous art style with fluid, responsive animation and an amazing, fitting soundtrack
+Fun, light-hearted story with hilarious writing and an endearing cast
+Stupendous pacing
+Combat and platforming are both deep and challenging, but also fair

-Some attacks are hard to dodge

Both versions look and play excellently, but the cross-play, cross-save, and cross-controller features are worth talking about anyway. Buying one version nets you the other for free and the cloud saving allows easy continuation of progress once you’ve uploaded a save. Sadly, it doesn’t mean twice the amount of trophies (one list, two games).

The most interesting feature is the cross-controller support, which allows the PS3 version to be played on the TV using the Vita as a controller and map. Yes, it sounds like a Wii U. This feature is novel, yet awesome and will hopefully be something more games consider.