It’s a Jungle Out There

New York is not the same. Gone is the concrete jungle of buildings and roads. In its place are trees and grass. Luscious green environments sprawled across the concrete which built the city itself. This is your playground.

If you’ve ever dreamed of being a silent killer with an affection of bows, Crysis 3 would be your game. 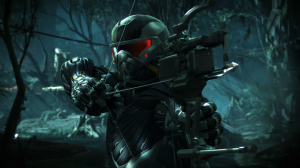 This man draws to kill.

Crysis 3 is the story of Prophet. Who after shooting himself in the head at the start of Crysis 2, is still alive to fight CELL and the Ceph. Having never played a Crysis game, the story was confusing. Even after watching the “Previously on Crysis” video in the game. It’s about aliens and humans, apparently.

Regardless, the main draw in Crysis 3 is the gameplay. Luckily, this game excels at it. Controlling Prophet isn’t the standard “you are a tank” character we see in most games. Prophet is weak. Except for the Nanosuit attached to his body. The Nanosuit turns you into a super soldier. You have abilities such as jumping higher, having incredible strength, and quick speed thanks to the super suit. The suits two main abilities include maximum armor, enabling a stronger shield deflecting a percentage of incoming damage at the cost of movement speed. The other ability, invisibility, is the crutch of the entire game.

With invisibility, the game becomes a quasi-stealth game, giving you the option of going in guns blazing  or sneaking around enemies, avoiding encounters altogether. I chose the more stealthy way to play, because it provided me with more of a challenge.

Prophet invisible. (He’s the guy you can’t see right in the middle.)

The weapons in Crysis 3 are fine, but I only really used one. The Bow. The first thought you may have is, “Why use such a primitive weapon when you have technology like the Nanosuit?” It is because the bow is powerful, quiet, and deadly. There is no reason to use another weapon, unless you’re spotted and need to quickly mow down enemies. The bows main draw is the fact you can stay cloaked while using it, making it the ultimate stealth weapon.

Even with good weapons, you cannot escape terrible bosses. While there were only two, they soured my entire experience. The last boss is especially frustrating. I won’t spoil it, but since the enemy is technically above you, it is hard to look up and run out of the way of its one hit kill attacks.

Don’t worry, this guy is there for the entire duration.

For the entire single-player campaign, it took me about six or seven hours to finish. I won’t say it was too quick because I enjoyed everything up until the last level. If the beginning of the game included another three or four more hours, I wouldn’t have minded. The length may off put some, but if you’re looking for a quick weekend game, Crysis 3 is perfect.

The multiplayer is actually very well constructed. It boasts a large number of playlists, each with a ton of variety. The mode which stands out is the Hunter mode. Where invisible hunters wielding bows try to take down gun wielding CELL soldiers. Each kill for the hunters brings that player to their team. It’s a survival of the fittest, and it’s quite fun. The real test of Crysis 3’s multiplayer is of time. The number of people who stick around with it will determine where or not it is worth checking out.

One aspect of Crysis 3 which you will notice immediately is how it looks. It’s gorgeous. Crytek has been about pushing the limits of how well games can look. Crysis 3 is visual eye candy. Even on an Xbox 360, the game looks great enough to make you stop and look around. Sometimes you’ll actually get disappointed when areas get too dark or corridor filled. The game still looks great, but the same old black and grey can’t showcase beauty. In the third mission where you’re outside in the tall grass is where you’ll get your first look at the beauty of Crysis 3.

This level is breathtaking, and not because I died about 5 or 6 times.

At the end of the year, Crysis 3 won’t be winning any Game of the Year awards. But it is still a solid experience. Everything leading up to the last level is a blast, and you’ll enjoy playing through it. Do yourself a favor and rent it for the weekend. Rent, not buy. I believe it falls just short of an extreme replay value constituting a $60 price tag.