Every possible year is graced (or plagued if you’re a hater) with a Call of Duty title and, since we’re in an even numbered year, Treyarch has been the studio behind Call of Duty: Black Ops II, 2012’s entry in the explosively popular franchise. Rather than sticking in the past both in design and time period, Treyarch has made this operation take place mostly in the year 2025, along with attempts at making the campaign match this fresh, futuristic feel. Black Ops II sticks to its golden and tried formula, but tries to wedge new features in the nooks and crannies. A noteworthy effort on an annualized franchise even if some choices aren’t implemented as well as others.
END_OF_DOCUMENT_TOKEN_TO_BE_REPLACED

For ten years now the Kingdom Hearts train has been chugging along smashing Heartless in its way and picking up colorful characters from all walks of life, from our childhood Disney films to our melodramatic role playing games. Kingdom Hearts: Dream Drop Distance for the Nintendo 3DS is the latest title to drop in, and it is also the latest in an ever growing chain of silly names. After ten years does this title go the distance to bring the series forward, or is it more shameless padding along the lines of Re: Coded? Thankfully, it is most definitely the former category.
END_OF_DOCUMENT_TOKEN_TO_BE_REPLACED 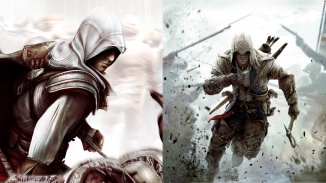 Reviews are a general overview of what makes a game good or bad, which, because of limited attention spans and space, don’t necessarily allow for some aspects to be completely broken down to their essence. I’m not saying reviews aren’t thorough, but there are times where I wish I could just dig deep on what exactly makes a certain aspect of a game so good (or so bad). From this thought process The Breakdown was a logical conclusion, a feature in which I take a game and go into specific detail on why a the topic of interest does or doesn’t work.

The Assassin’s Creed games containing Roman numerals have always caught an undesired amount of flak for one aspect: the gradual ramp up that happens in the beginning or, as some extreme pessimists would say, the multiple hour borefest that precedes the stabbing. Such a point seems petty to make, especially since it sets up the following events spectacularly, better than almost any game on the market. An approach such as this shows that Ubisoft can exercise patience and gives gamers something to care about whether they know it or not.
END_OF_DOCUMENT_TOKEN_TO_BE_REPLACED

To knock out some spare time and to help in my pursuit of procrastination, I popped in Tekken Tag Tournament 2 for a few quick matches. I usually go back to a fighting game frequently enough to shake off any permanent rust, but something special happened on this occasion: I got some free stuff. A lot of free stuff actually. Not just a costume or a hat for Panda (although let’s face it, that would be rad), but a slew of seven actual characters, a gigantic pack of costumes, and a stage dedicated to Snoop Dogg (I’m not calling him by his new sellout persona). I never asked for this, but it dawned on me: Namco Bandai maybe doesn’t see me as a cheap whore, one they can push on the street corner in order to milk a few dimes out of. I feel like a respected consumer to them.
END_OF_DOCUMENT_TOKEN_TO_BE_REPLACED

I’m a man of my word, so I’ll ask you again: Do you still want to stab dudes? After last year’s underwhelming Assassin’s Creed: Revelations, I wouldn’t call you out for being hesitant to once again wield the dual wrist blades just a mere year later. Assassin’s Creed III picks up the increasingly flickering torch but blows out expectations, despite following the series’ new annual slightly downward curve. Moving to a new time frame, starring a new hero, and refining or perfecting franchise mechanics catapults Assassin’s Creed III far beyond being “just another Assassin’s Creed” and into the discussion about being the best Assassin’s Creed game. Sweet, sweet redemption.
END_OF_DOCUMENT_TOKEN_TO_BE_REPLACED

That time of year is completely upon us now. No, not the holidays, games!
END_OF_DOCUMENT_TOKEN_TO_BE_REPLACED